Wild rivers are earth's renegades, defying gravity, dancing to their own tunes, resisting the authority of humans, always chipping away, and eventually always winning.

The upper Murray River tackles the walk in and the upper 150 km of the river of which I broke these into four major legs:

Summit to Source
The summit of Mount Kosciuszko down to the source at the Black-Allan Line. ~60 km
Source to Limestone Ck
Trekking down the Murray River. ~15 km

There was a total of 180 km hiking Mt Kosciuszko down to the source with a gear drop to Limestone Creek. Due to low flows, I walked an additional 43 km down the Murray dragging the kayak with only about 82 km actual paddling. If I had travelled from the start to finish in good conditions and no gear drop, then I would have been looking at approximately 55 km on trails, 15 km off trails and 125 km kayaking!

Leg One: Summit to Source 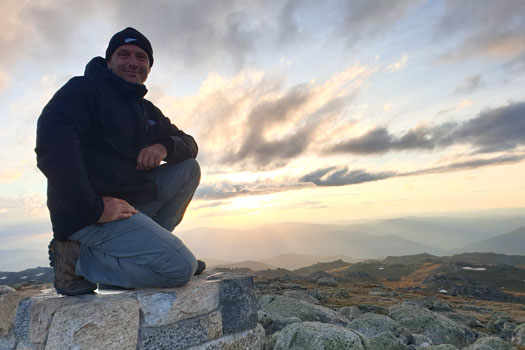 On foot from the summit of Mount Kosciuszko down to the source of the Murray River.

Following the upper Murray River down to Tom Groggin is the big unknown in the trip. Potentially impenetrable bush and / or dangerous flood waters or snow could make this an intrepid journey.

What I found in early summer was an easily passable small mountain stream with some log jams, rocky outcrops and thick surrounding bush. A lot of animal trails due to the high number of feral horses made detours around any log jam easy. 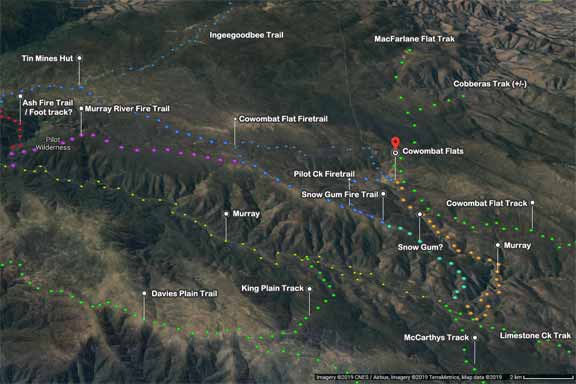 This is the longest section in the Pilot Wilderness Area, where my plans were to use a packraft to kayak down the Murray River with an optimistic goal of just two days.

With a good flow and whitewater experience, this section would only take one to two days (49 km), and the worst case estimate is as much as seven long days to traverse this 70 km section of the river.

Note that without any floatation device (kayak / raft / lilo), trekking this section is likely difficult in places due to fairly deep pools and steep rocky outcrops.

A water level of at least 0.5m and flow of 500 ML/day is a likely good base level (Biggara gauge). I do not know if higher flood flows would wash out the rapids, but it would be more dangerous with the log jams.

Note, the actual flow at the Poplars would be only about 10 to 20% of the flow seen at Biggara.

Conditions were fairly bad with low flows and I took 4.5 long days on the river and another 3 days walking to get to the source. Due to the hot & dry conditions, I was hauling the kayak nearly 45 km through unpaddlable waters. I was averaging 1.5 km/hr wading the river and only 1.2 km/hr when hauling the kayak.

My trip was initially planned for mid-November, but was unnecessarily delayed by two or three weeks waiting for the trail to be flagged as open when it was likely easily navigable, followed by an unseasonal late snowfall, and then work. However, even mid-November the flow was low and I would have likely experienced similar difficulties.

While planning various escape routes before starting this trip, smoke haze obscured most key bearings and the terrain / thickness of the bush made me extremely wary of trying to do any more off trail hiking than what was absolutely necessary. Especially after already losing key survival gear doing the same thing during the gear drop. As such, I really only considered traversing up or down the Murray river as the only viable escape options here.

I pushed on and this leg was completed without having to leave the river other than to skirt around the occasional log jam. 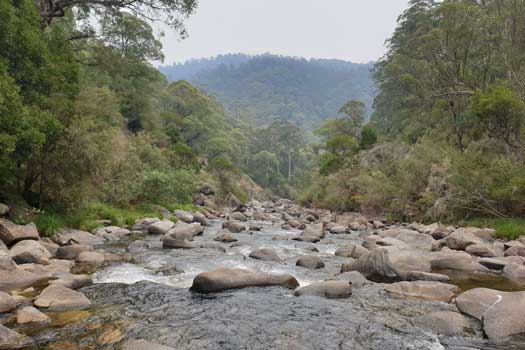 Grade IV rapids would be a risky trip solo so I was contemplating either a guided raft trip or walking an extra 50 km along Harrington's Track.

A guided tour of the gorge would make the logistics should be fairly easy to finish this leg off. Otherwise, it will be traversing the gorge solo somehow, then hitchhiking the 80 km back to the car or vice versa.

A water level of at least 0.8m for the gorge is recommended for a true whitewater experience, which roughly corresponds to a height of 0.45m at Biggara.

Refer to the Biggara gauge for the current level and planning page for previous trip analysis of water flows.

Finishing leg two on Christmas day and knowing that the flow will be terrible, I didn't even try to contact Rafting Australia about the possibility of a guided trip. With a possibly suicidal mindset, I bit the bullet and decided to keep going. Surely it couldn't be that dangerous with these flows?

My rather stupid decision paid off and I had an amazingly fun trip through the gorge on what were probably mostly technical Grade II+ sections. Second day was mostly flat water paddling down to the Alpine Way where I caught three separate rides hitching to make it back to the car within 4 hours.

Personal Blog and Guide to Kayaking the Murray River

Digest of the key info for towns and weirs below Bringenbrong.