The Source of the Murray

History and logistics of finding the source 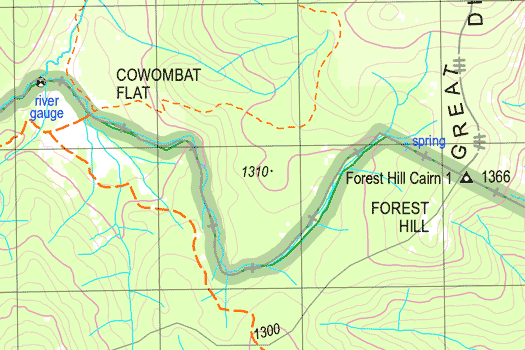 From Cowombat Flat, walk up the Murray River to the start of the Black-Allan line. From here, head ESE along the border to find the spring. It has a steel pipe that was placed by the RMIT survey group in December 1984. A canister attached to this pole has a visitor book that you can sign. This spring can also be located by finding the Forest Hill Cairn #1 that is on the edge of the saddle between the knolls of Forest Hill (on a spur of The Pilot). Follow the line of rocks 22.5 chains (cough 452.6 metres) northwest from the cairn until you find the source.

I was guesstimating a day just to find the source based on old reports, however it was an easy walk up from Cowombat Flat in fairly open terrain to the Black-Allen line. This took me about an hour one way. If both the NSW and VIC Parks service do feral animal control in the area, namely feral horses, this trip is likely much harder as the bush will recover and become thicker. 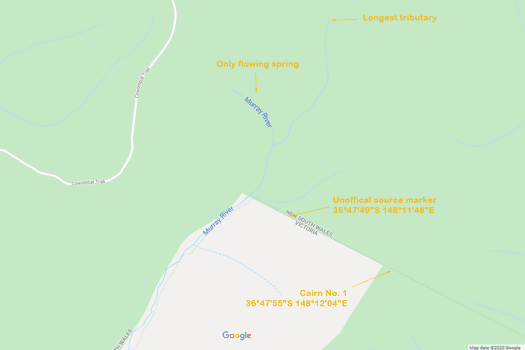 The Murray River source was indirectly determined by the Act of Separation Bill, 1851 that legislated the separation of NSW and VIC. This defined the border as "a straight line drawn from Cape Howe to the nearest source of the Murray River". This was first surveyed in 1846 by Townsend, and Black confirmed this as the most eastern of the sources in 1869. It was officially named the Indi Spring in 2006, which is the Aboriginal name for the Murray River and also means 'something far away, or belonging to the past'.

Note that Limestone Ck is a likely alternative for the true geographic source if you are considering all sources within the alpine areas of VIC/NSW. It would be interesting to discover the history of both rivers, and what made the smaller eastern tributary to be named as the Murray. The political direction in the 1850s wasn't to define the Murray River course, only to find the eastern most headwater.

This is a bit of a moot point as the best current estimate for the true geographic source of the Murray-Darling Basin is actually the Condamine River in QLD.

Digest of the key info for towns and weirs below Bringenbrong.

Some of the longest whitewater runs in the country.