After shortlisting a number of various brands, I found an older fiberglass Mirage 580 on GumTree and an inflatable Sevylor Rio and Prijon Kodiak on Facebook Marketplace that were within my budget.

Note that I have no affiliations with any of these bands.

This covers almost the entire length of the Darling and Murray rivers that are controlled by weirs with minimal hazards. Almost any kayak could be used on the Murray with regular towns along the way, but a reasonable carrying capacity is needed for the Darling with bigger distances between towns. The need to carry extra food would be a moot point with food drops along the way. Since I was not doing food drops and I had plans for a quick trip, I leant towards a fiberglass sea kayak for both carrying capacity and speed.

A Tiderace or Rockpool seem like the best choices, albeit I have never even paddled either kayak. Most of the UK speed records are with the Rockpool Taran, the Americas seems to have a bigger mix, albeit the Epic is common. Being locally made in Australia, the Mirages are common there.

Holder of most of the kayaking distance records around the UK.

This was the boat used by Freya Hoffmeister on her trips around Australia and South America. The weight savings or quality control seem to have led to a few reports of thin spots on the hull and this delegated it down my list.

Australian made, this is a true, expedition proven sea kayak. The later model of the secondhand 580 I finally purchased.

These rivers had a different requirement with narrower and twistier paths with additional hazards that included submerged trees and rocks, but there were still significant long sections of flat open water too. A river runner would have the perfect choice, but need for carrying capacity made me look at crossovers and plastic sea kayaks. I was learning towards a crossover until discovering that an important supply spot had closed and I went with a sea kayak for the capacity to navigate the longest 600 km section without support. The need to traverse dams and log jams should also be considered, this was harder with the heavier sea kayak. This is less of an issue if you are traveling in groups.

There is only one short section in the Murray River between the whitewater of the gorge and the confluence of the Swampy Plains River that is best suited to an intermediately boat, but it wouldn't be worth your effort to consider a different kayak for this short 42 km section.

A surprising secondhand find in the week before starting the Darling system trip. An excellently designed touring kayak!

It's length was challenging at times around the flooded tree top strainers, but overall fairly manageable even when fully loaded.

This was the longest of the crossover kayaks I was considering, its ability to carry a load and speed on the flat water would have made it my first choice.

For a single boat to handle all conditions, choices are limited to something from a creek boat to a packraft that can handle Grade III whitewater. Having to carry gear into the upper Murray, I had limited options and had to look at packrafts. However, it is possible to get a 4WD into this area to do a gear drop. In good flows, you should be able to traverse this section in a day or two down to Tom Groggin.

I really had no idea what to use for the trip when I started. I considered everything from lilos, rafts and other inflatable devices. Without realising how bad the flows were, I decided on finding a pack raft with dual layer protection to help prevent punctures in rough conditions that had a carrying capacity of at least 120 kg.

I found the Sevylor Rio 1-Person "Fishing Canoe" for sale secondhand on Facebook Marketplace for $200 and was sold. A lighter packraft like the Kokopelli Nirvana is probably more suited to this leg. 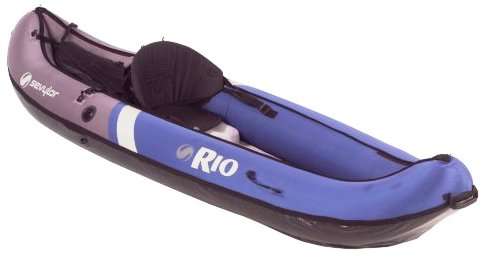 What to eat on extended trips