Fire is a real risk in many areas of the world.

In Australia we are having our worst ever fire season due to hotter conditions on top of a prolonged drought. 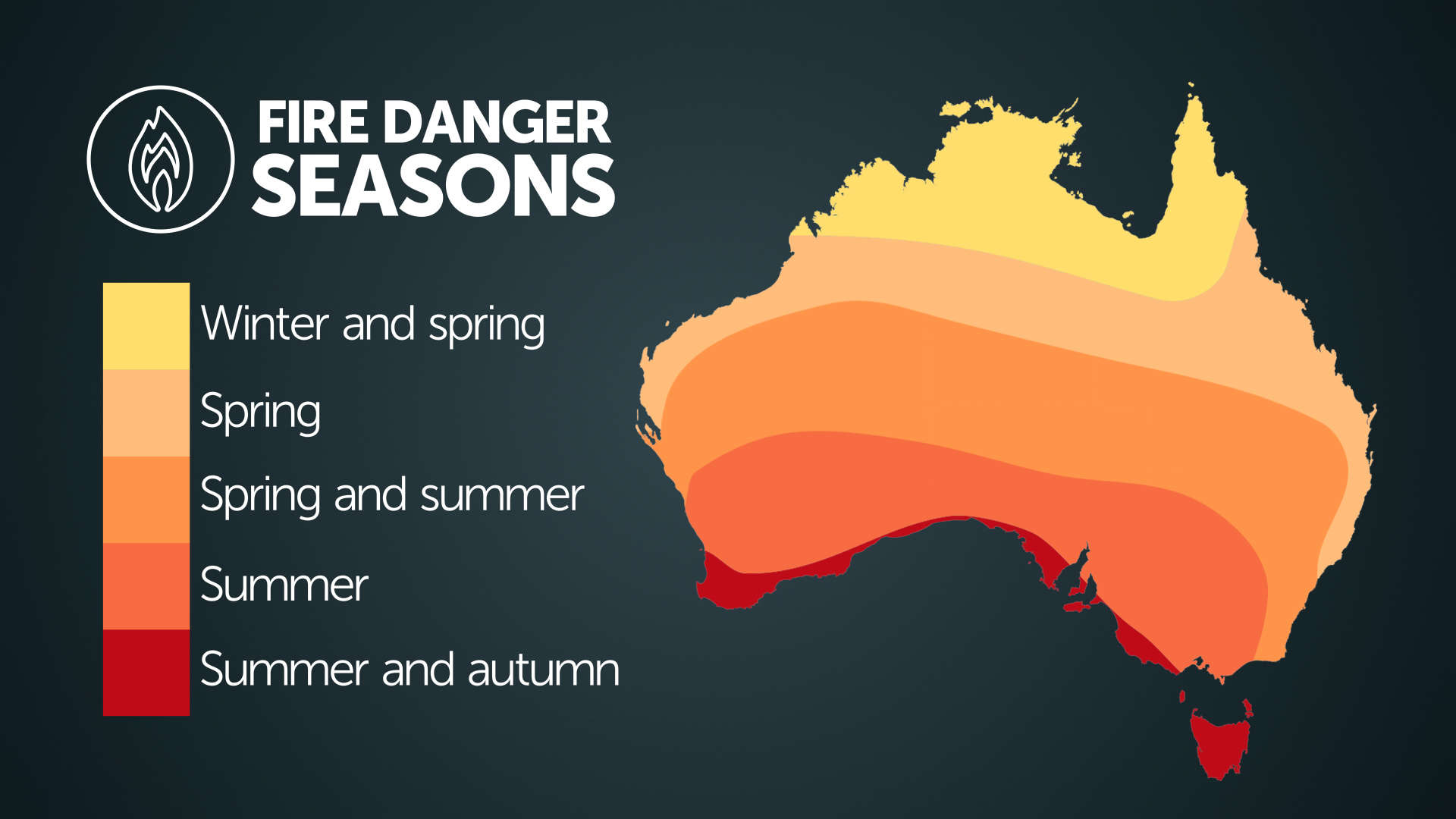 The Corryong (Green Valley) fire started the day I had left the area when dry lightning struck and provides an excellent example about the dangers.

Just four days later, it has grown to 42,100 hectares in size and is currently affecting every area of the upper Murray River, including many places from my trip such as; 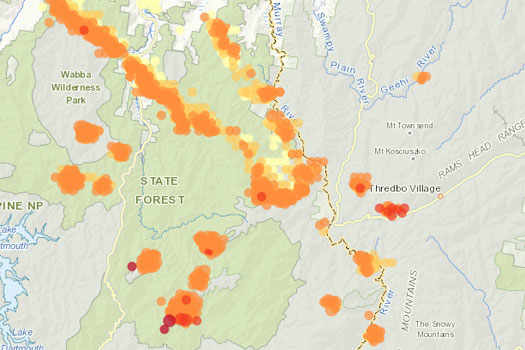 Even if I was safe, this would have completely ruined all of my plans if I was still in the area. Kosciuszko National Park was closed with mandatory evacuations, with a state of emergency mandating evacuation of nearby towns including Biggara, Khancoban and Towong today. This fire eventually merged with another fire to the north creating a large mega-fire. 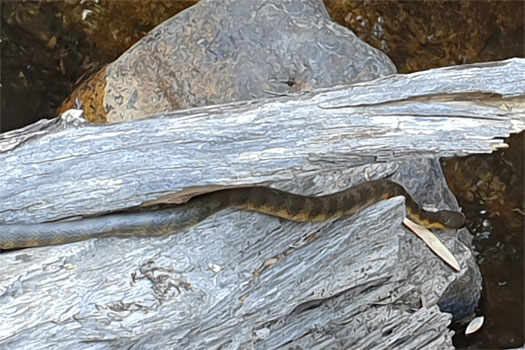 Giving an honourable mention to our little legless friends.

Firstly, remember that horses and honey bees are much more likely to kill than these little guys, and secondly, most snake bites occur when people are attacking or trying to handle the snake.

In fact, an unprovoked fatal snake bite has similar odds to being killed by lightning or having a coconut falling on you when you are in the tropics!

This is informational only and you should get training by professionals on proper care of snake bites.

If you do see a snake when kayaking, stay calm. They are great swimmers and will dive underwater if startled / threatened. Do not attempt to hit it with your paddle. Not only is this illegal, you risk causing the snake to get entangled on the paddle or to make it to defensively strike out. When trying to get close to take photos, I find it difficult not to spook snakes, as normal paddle strokes cause most to quickly flee to the shores and a hard back stroke or sweep will cause the snake to dive underwater to escape.

According to the World Health Organisation, there are about a half million deaths worldwide due to water borne diseases like diarrhoea, cholera, dysentery, typhoid, and even polio. Polluted water is no joke!

In Australia, the biggest risk is from Cryptosporidium in remote areas, Giardia and other common agricultural borne bacteria. Australia reports the second highest rate of cryptosporidium illness in humans across developed nations, especially with children in remote areas. These are worse in times of drought.

Blue-green algae (Cyanobacteria) are common, particularly in summer where there are low flows. Some of these algae produce toxins or chemicals that can affect the taste and odour of the water, as well as making it dangerous to drink. Activated carbon (removal) and chlorine (oxidation) help to reduce toxin levels, but it is best to avoid this water completely.

Refer to the Water Treatment page for details on how to clarify and treat water.

When paddling any form of whitewater it is strongly recommended that you do not paddle alone. Groups of three to seven are recommended. Three paddlers will allow one person to stay with an injured paddler and the other can continue super cautiously down for help. Larger groups can be difficult to coordinate. Sea kayaking is more apt to solo paddling but paddling with a group has advantages from being able to tow an injured paddler to shore or being able to raft up for bad squalls or simply for a toilet break.

Paddling exposes participants to a wide range of dangers. The ones most commonly encountered when flat water paddling flowing rivers include the following:

A tree that is fallen or leaning into the river but not fully submerged and is still anchored to the shore. If you paddle directly into a sweeper, the current could force both you and the boat down under the water risking entrapment, or it could simply trap the boat in the branches. Even in the case of the latter, getting free can be difficult, potentially requiring you to exit the boat. This can risk being pulled under yourself and becoming trapped under water. Always keep your PFD on unless it becomes entangled with a stag underwater. A well fitted life jacket worn correctly should have less risks of entanglement than one incorrectly worn.

The best way to handle sweepers is to stay well clear. To do this effectively you should stay observant to both the danger and the river current that may be flowing towards the sweeper. The river current generally makes sweepers on the outside of a bend more dangerous than those on the inside.

As no two trees are the same, the same applies to sweepers. Towards the base of a fallen tree there are sometimes less branches and you could be able to bump over the trunk with speed or slip through a gap. This gets riskier on outside bends as the current is greatest towards the shore and you risk wrapping your boat around the trunk as easily as if it was a ribbon. If you are going to hit a larger branch, learning towards it will make it less likely that you will capsize when you make contact.

Towards the canopy, it may be possible to pierce through the smaller branches with just a few cuts and scrapes. In saying this, small branches have the tendency of trapping a moving kayak easily if it has deck rigging or a rudder attached. I have also nearly knocked myself out on at least one occasion as these smaller twigs and leaves were hiding a large branch behind them. 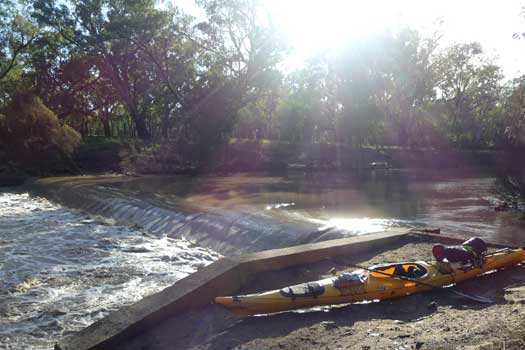 One of the least concerning looking hazards is actually one of the most lethal dangers that paddlers will encounter. Weirs tend to be uniform and fairly wide allowing them to create a perfect hydraulic across the structure that even the most experienced paddler may not be able to escape.

There is only one way to safely navigate a flowing weir, to portage around it. The current can be deceptively strong near the weir, so stay close to the river bank and exit well before the weir. Below the weir wall there will likely be a strong upstream current going back towards the weir, as the eddy flow is recirculating back. Finish your portage below well below these currents.

In the case you get trapped in the current flowing towards the weir, and you definitely can't paddle back out of danger, keep calm and pray. Keep the boat perpendicular to the weir and keep your speed up. If in an unloaded creekboat, treat it as a small waterfall and try to boof your way over the head wall. In a sea kayak, paddle as hard as possible and do your best not to nose dive. In both keep paddling as hard as possible as soon as you touch the water below the weir until well clear of the hydraulic. The water will be highly aerated making this difficult if not impossible.

Some weirs will be clearly marked but on many rivers there are no warning signs nor buoy lines. Just with sweepers, staying alert can help you discover weirs before you are too close to react. The sound of rushing water on a flatwater river is a major warning signal of a hazard ahead. Stay near the riverbank on the inside bend scanning ahead for the source of the noise.

Flush Drowning
General term for an unknown drowning but usually thought to be due to a paddler being pinned underwater by the current even when wearing a PFD or due to the result of a long swim often in cold water. In alpine or winter paddling, hypothermia is often a significant factor. Older adults are more at risk.
Drowning
Not wearing a PDF, particularly associated with drinking is one of the leading causes of recreational paddling deaths.

The faster the current is moving or with higher volume flows, the risk of all of these dangers increase.