A look at the blue signs along the water way 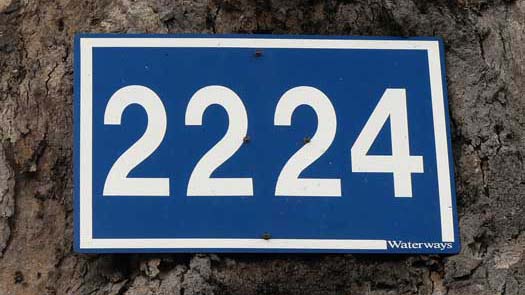 From the Hume Dam there are blue signs that were put up by the NSW and SA water authorities to mark the distance from the river mouth in kilometres.

The measured path goes around Hindmarsh Island past Goolwa and Clayton Bay before taking a fairly direct path across Lake Alexandrina and up the River Murray closely following the old path of the river from around 100 years ago. Over the years, the path of the Murray has slowly changed and many of the bends have since become islands or billabongs. A few are no longer navigable in normal flows. 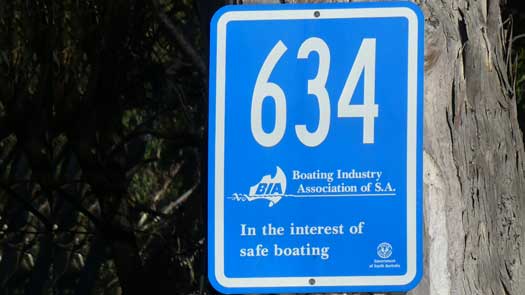 The blue signs that we see today were initially put up in the 1990's by NSW Waterways Authority and Tourism SA and are currently being maintained by WaterNSW and Boating Industry Association of SA. All of the blue signs in NSW are on the NSW side of the river, while those in SA can be found on either side. A couple of the signs in the lower Murray are on buoys. All signs have even numbers and are most frequently placed around towns and less frequently in remote areas. The only odd numbered sign is a fake 229 marker that is a short distance downstream of the 230 marker.

Below Wentworth there are older white signs that were put up by the Liba Liba Houseboat company in Renmark. These older signs measure the same distance to the river mouth in miles. 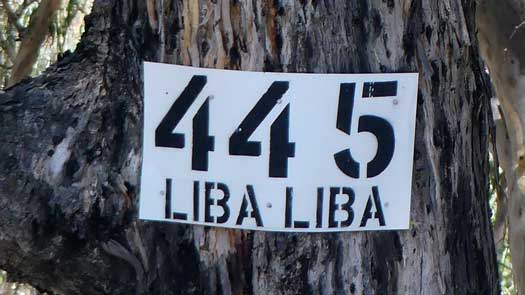 The original mile markers are much older and were carved into the red river gums between Albury and Wentworth in the steamboat era. Some still remain today albeit these can be hard to find without knowing their location.

The calculated distance was 2,190.4 km from the river mouth to the first blue sign 2224 just downstream of the Hume Dam. This was just 1.5% out and rather remarkable for the era that these were calculated. The actual distance paddled will be significantly less than 2,190.4 km as the main river course is now shorter and many paddlers will take additional shortcuts.

Above Hume Dam, the numbering was continued using the QGIS QChainage plugin that should produce extremely consistent markers based on OpenStreetMap. https://www.openstreetmap.org/ river track with manual corrections using various satellite images. This same track is also used to mark the river on the map below*.

Path across Lake Hume follows the original river channel as much as possible, then the state lines. This is a total of 89.6 km, while the direct path across the lake when fill is around 54.3 km. 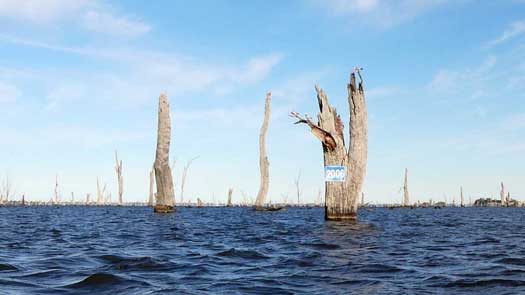 Locations of most markers on Lake Mulwala were unknown to me but I had a rough stab at mapping these based on the single known marker 2006. The path traced from the Ovens River to the Weir is 34.5 km, but using the available shortcuts when the weir pool is filled you could cut this distance down to 18.7 km.

The track across Lake Alexandrina uses a direct line. The last marker seen was marker 72 which was fairly accurate for a direct path across and past Goolwa to the river mouth that I measured as 71.4 km. From the same point, a direct path to the river mouth via Tauwitchere Barrage (a self-operated lock) is 54.8 km and via the Ewe Island Barrage (portage and shallow if the lake is low) is 52.7 km, both will be marginally longer if done on a low tide.

All of the markers are added to the map below. You need to zoom in to see all of these markers. These markers can be downloaded from the links below the map.

* The KML track used here has been simplified using the Douglas-Peucker method with an ~10 m tolerance and the coordinates of the remaining points were rounded to 4 digital places.