Where possible, weather statistics are based on the 30 years between 1990 and 2020 though some didn't have the entire 30 year range. Deciles are 1 to 9, meaning these figures exclude the lowest and highest 10% of observations. i.e. they are normalised to exclude the extreme values.

Frosts are common in Warwick during winter, but as it is typically has a dry winter so that snow is almost unheard of. There are uncommon dumps at higher altitudes such as Stanthorpe (Elevation811 m, Drop+334 m to Warwick) that could get as low as the First Crossing on the Upper Condamine (Elevation650 m) .

Through the Balonne and Culgoa sections you will transistion into the more arid inland weather patterns. It can still get fairly cold in winter with dry frosts. Summers can get extremely hot, close to 50 although the average is only around 36°C. 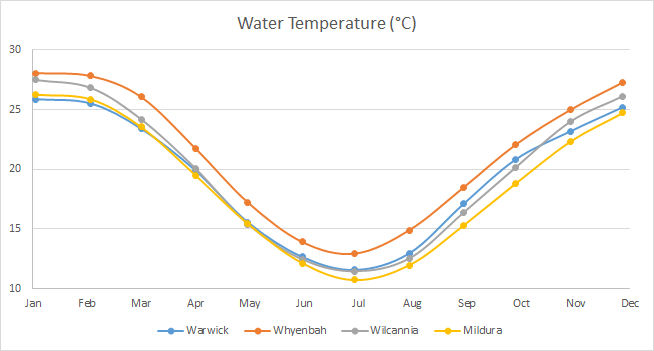 Temperatures can flucurate a lot especially with poor or no flows. In general the Condamine (Warwick) is cooler and the Culgoa (Whyenbah) that has the least flow is the warmest. The Darling (Wilcannia) is cooler in high flow events and warmer in low flow conditions

The Murray River generally the coolest as it is still carrying chilled water from the Hume Dam 1 away.

As you head down the Balonne River, the influence of the tropical wet season decreases and these are gone by the time you reach Bourke where rains in the Darling Basin are rare and usually light. 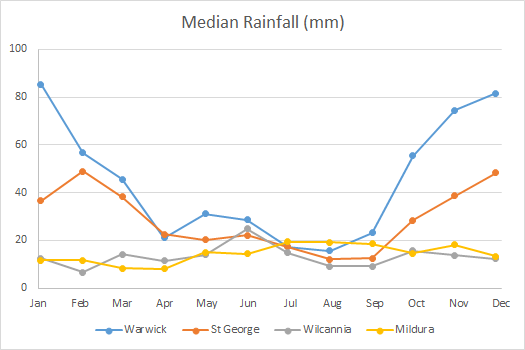 Some notes about SEQ highest peak