Access may be restricted due to low water levels, events or other safety concerns such as firefighting aircraft using the dam.

Please check with SEQWater for the latest updates before heading out.

Lake Wivenhoe is popular with boats for fishing and campers, but is large enough to ensure you can easily find a bay where you are by yourself especially during weekdays. The lake is surrounded by mostly private farmland with some small forested areas

Lake Wivenhoe is South East Queensland’s largest water reservoir and provides the primary supply of water to Brisbane and Ipswich. As such the water level is subject to demand and the lake will be lowest after a long dry spell. When filled the dam contains approximately 5.5 years supply of water. It also plays an important role in flood mitigation and can increase capacity by 68.8% if required.

While it is flatwater paddling, it is a fairly large body of water so conditions can get rough in stormy or windy weather. It's narrow profile can make the size deceptive and there are a couple of points that the dam is 3 km wide. The lake is approximately 35 km long but this follows the curves of the land. It is over 50 km from O’Shea’s Crossing to Branch Creek. 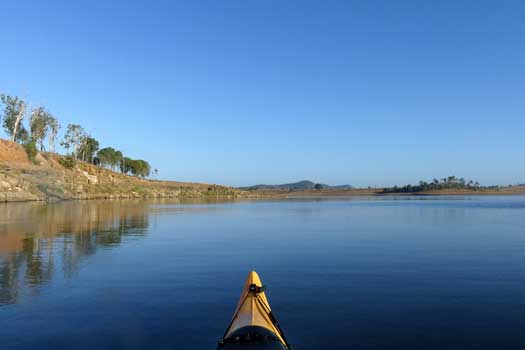 There are multiple put in spots around the dam. Going around in a clockwise direction from the dam wall you have:

† O’Shea’s Crossing and Hamon Cove boat ramp were both closed as water levels fell below 50%.

There are two stop off points with picnic tables, rubbish bins and toilets:

When coming via the Warrego (M2) motorway for a paddle, I use Logan’s Inlet boat ramp rather than Branch Creek, 1 km further away but without the portage. Otherwise, simply pick the one nearest to the location that you want to explore!

Primary point of truth for the lake should be the official SEQWater published Location maps and guides.

The following is a rough guide about different locations around the lake. Since the lake levels do fluctuate, distances could vary considerably as the water level drops. I have never noticed any taps / water available at the site listed and these are not mentioned by the SEQWater guide for Lake Wivenhoe though potable water was noted for Somerset Park below Somerset Dam.

Low water levels will prevent access up the Brisbane and Stanley rivers.

† Most of the features were taken from SEQWater published Location maps and guides.
‡ Distances are approximate only and are based on roughly staying near the shoreline while crossing most of the lakes sidearms. These crossings may be up to 1 km wide. Also, rather than a 3 km crossing on open water, I assume one would cross in the central zone of the lake to connect the eastern and western sides that are no wider than 0.5 km. 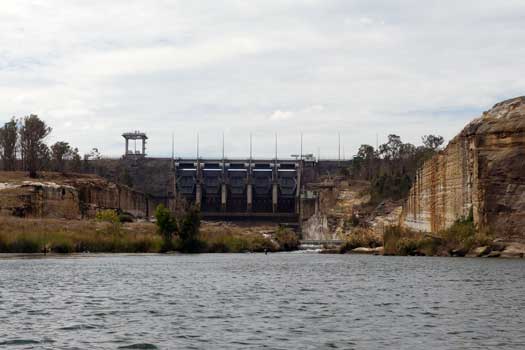 Refer to the SEQWater Lake Wivenhoe guide for up to date information.

* Highly recommended (aka required)
† You should wear clothing and footwear that you can comfortably swim in.
‡ These are for self or assisted rescues as there are places that you can't easily swim back to the shore.

There is a wide variety of birdlife on the lake. Darters, Cormorant (often large flocks), Egrets, Pelicans, Coots, Ducks and Swans are common on the water and a large array of other species can be seen along the shoreline.

You could be lucky and see some turtles before they dive into the water, as well as getting a sudden visit by the large and protected Australian Lungfish coming up for air. Native mammals are less frequent, but occasional kangaroos can be seen along the water's edge