A look at the flow, temperature and management at key locations

Flow is one of the most important considerations.

In the upper section, low flows will make this unpaddlable and in high flows it will be very dangerous.

In the lower sections, the river should usually have enough flow to make the journey possible at nearly any time. A good high flow will make this trip much faster and more enjoyable than a low flow where you are fighting snags all the way down. Floods will likely provide good paddling conditions though take care in any high volume flows!

Flow was looked at over the last 40 years, noting that the last two decades have shown a drying trend not observed before and could be a sign of things to come with climate change.*

Binjura is very characteristic of the alpine flows, peaking with the spring snow melt and slowly petering off over summer to a low at the end of autumn.

It is interesting to note while the recent two decades have seen a reduction in flow, this is not as dramatic as the reduction seen in stations further down the river. 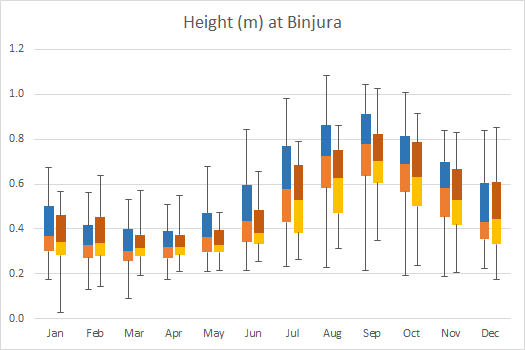 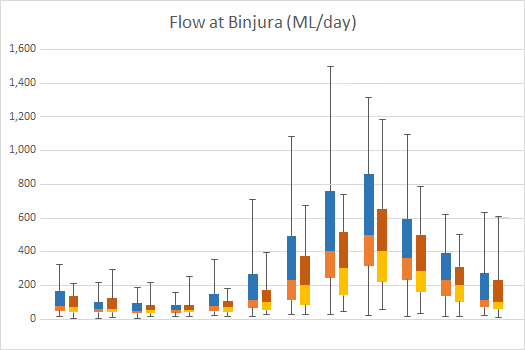 Gundagai flow is boosted by the influx of the Tumut, with a corresponding decrease in the water temperature. The Tumut is supplied with additional water depending on the water diversions due to the hydro-electric power stations on the Snowy Mountains Scheme. 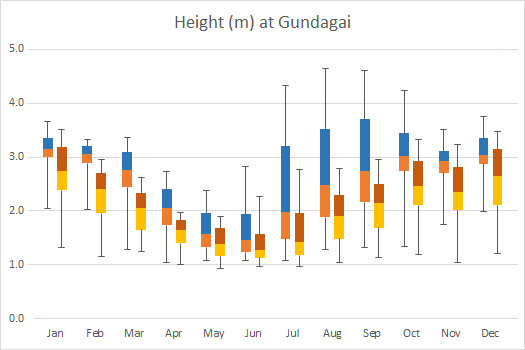 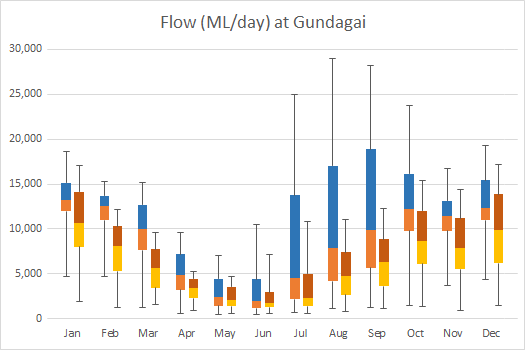 Narrandera shows the reduced flow after the outflows at Berembed Weir and other lesser irrigation areas, but is still above a number of other controlled outflows at Yanco Ck, Coleambally & Strut Canals. 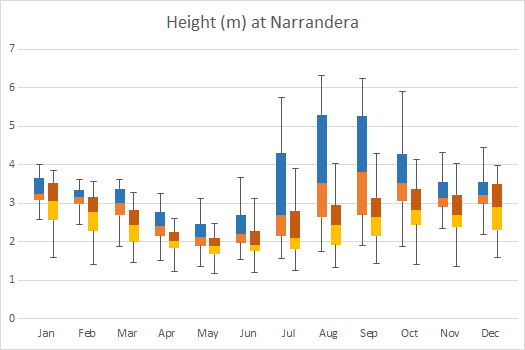 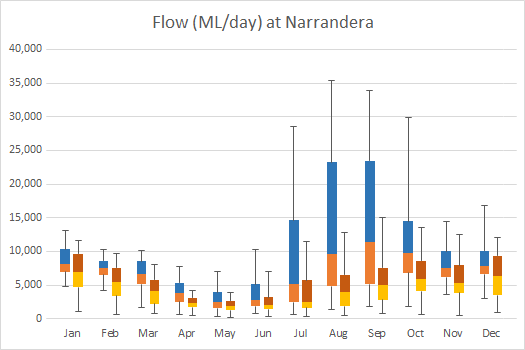 Darlington Point should serve as a good indication of the final leg down to Redbank Channel. While there are still agricultural draws on the river, these are much smaller compared to the upstream canals and diversions.

In the last two decades, approx. half of the water has been taken out of the river between Narrandera and Darlington Point over the summer and autumn months. Winter shows less of a water draw, with the flow reducing by 20 to 30%. 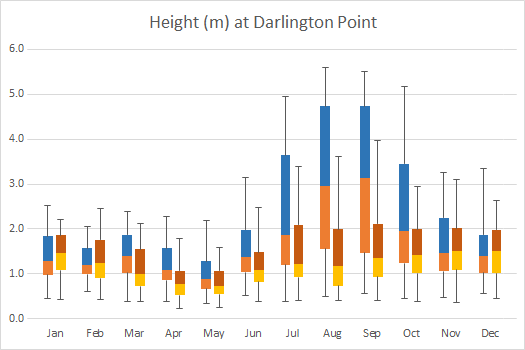 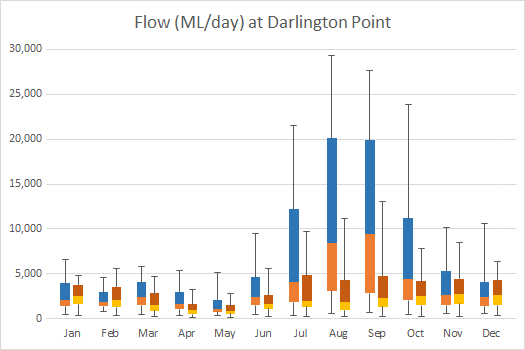 Redbank Weir (downstream) marks the end of the main irrigation outflows. Depending on conditions, the flow could potentially drop significantly between Darlington Point and North Redbank Channel. 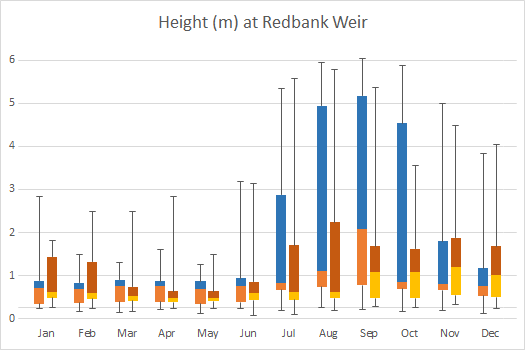 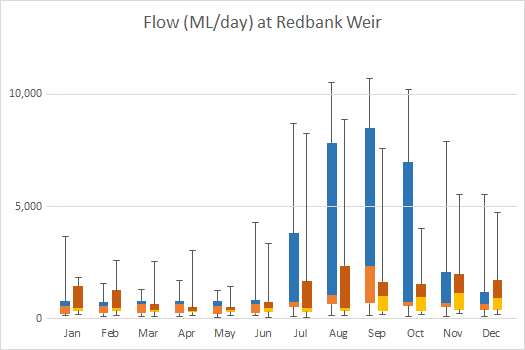 Balranald represents a low point in the flow after the majority of the water has been withheld or diverted upstream. Even with very low levels, this section should be paddlable. Mike Bremers paddled Maude to Balranald in 2008 with flows of 150 ML/day to 200 ML/day) still managed 30 km days. 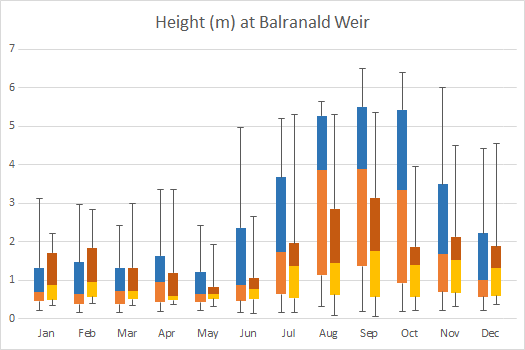 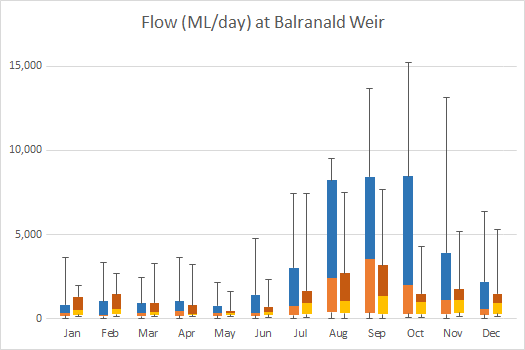 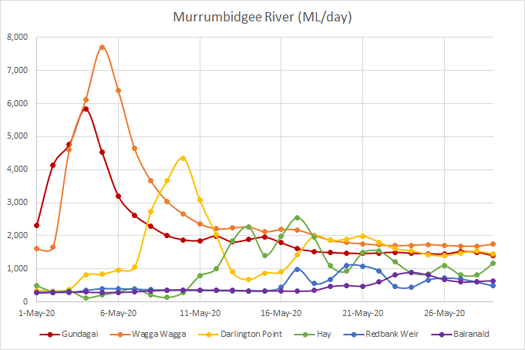 The average time it takes for water to flow down the Murrumbidgee from Jugiong to the River Murray confluence is approximately 25 days, or 45 km per day. The overall flow will slowly decrease as water is taken out of the system.

* Lower flows appear to be a mix of lower rainfalls, increased irrigation and increased (and sometimes unregulated) construction of dams and levees that don't even allow the water to enter the river system. ABC (2017)

Water temperature is the secondary consideration. This can be near freezing in the tablelands and frozen near the source in winter. Even on the lower section, it is unlikely to be above 10°C in winter. In summer, temperatures can climb close to 30°C in places, warm enough to no longer be refreshing.

The following charts show the temperature at Hall (near Canberra) and three stations along the lower section. Gundagal is cooled due to the influx of cool water from the Tumut River, but this warms quickly in the summertime heat. 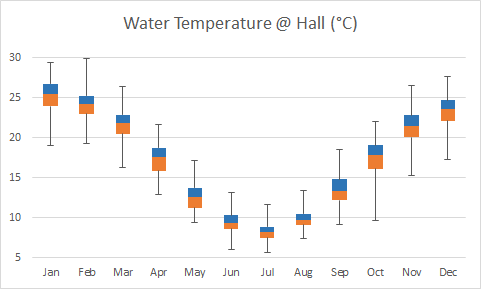 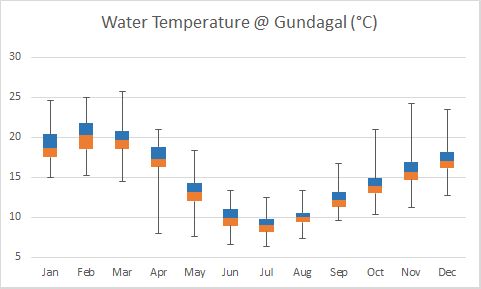 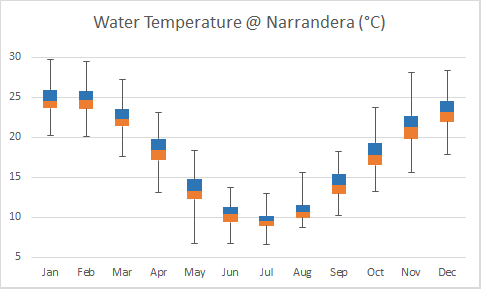 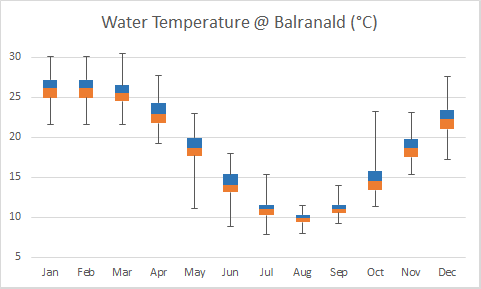 Storage systems on the river also play a factor in regulating the flow and for flood control. The major storages are:

Some additional info for anybody considering to do the Murrumbidgee River by kayak.