Kayaking terminology used to name features in rivers and oceans 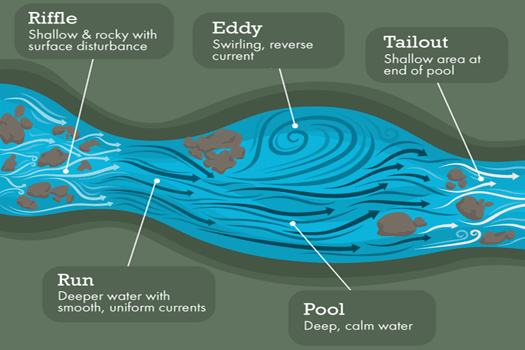 Pool
Deep calm water.
Riffle
Shallow and rocky area with relatively minimal gradient with surface disturbance.
Rapid
Shallow and rocky area with relatively steep gradient, causing an increase in water velocity and turbulence.
Tailout
Shallow area at the end of a pool (type of riffle).
Run
Deeper water with a smooth, uniform current. Also refers to the path taken a paddler down a set of rapids.
Eddy

Water "bounces" off an obstruction creating a calmer area behind it that draws water back towards the obstruction from downstream. The calm or gently flowing upstream area of water is the eddy. A swirling reverse current.

Paddles can peel out into many eddies and scout out the next rapid or simply have a rest. While eddies are generally calmer areas of a river, large eddies can create powerful currents that can trap or flip boats.

Eddy Line (Fence)
Boundary between the main downstream current and calmer upstream eddy current
Eddy Wall
Eddies are often lower than the main current creating a step or "wall" along the eddy line. This can make leaving an eddy difficult in big water.

Where water cascades down a ledge.

There is no exact point where a riffle becomes a rapid. Most Grade I rapids would probably be called riffles by experienced paddlers that are familiar with the term. In general, riffles will have consistent and fairly small rocks or gravels with a very gentle gradient and rapids will have boulders of varying sizes with a steeper gradient.

Whitewater
Rapids have enough turbulence to trap air in the water making it appear opaque and white.
Constriction
River's flow is forced into a narrower channel. This will either cause a run or a rapid depending on the streambed topography.
Obstruction
Streambed topography, boulders, logs or man-made structures.

Pillow (pressure waves)
When water flows backwards upstream of the obstruction. The water appears to "pile up" or "boil" up against the obstruction. This usually indicates the obstruction is not undercut, but not always.
Pour over
Water flows over the obstruction.
Hydraulics (Hole)
The river flows back on itself. Term "hole" is used as the aerated water provides less buoyancy and can feel like an actual hole in the river.
Waves
A large, smooth face on the water created in a hydraulic. A series of waves or a "wave train" can sometimes be created.

Wash out
Term used when an increased flow reduces the rapids difficulty.

Note that the angle of the water around an obstruction could either create an eddy (flowing sideways) and / or a hole (pulling downwards).

Curve in the river.

If unsure about a bend, keep your bow slightly angled towards the inside to allow you to paddle away from the outside quickly. There will often be an eddy line formed that will quickly pull out, albeit you often lose a lot of momentum because of these.

Water is forced between two bounders creating a downstream V.

Tongue
The smooth water in the chute.
Tail waves
Series of waves that are often found at the bottom of the chute where the two eddy lines join.

Upstream V marks a bounder or other obstruction in the water. It is best to avoid and if that can not be avoided, lean into these to avoid a potential capsize, especially where there is no visible pillow.

Strainers or sifts
Submerged objects that can catch a kayaker or their boat while allowing water to flow freely past, just like a food strainer or colander. These can be storm grates, fences, trees that have fallen into a river ("log jam") or even exposed tree roots.
Sweepers
A tree that is fallen or leaning into the river but not fully submerged and is still anchored to the shore.
Holes

Larger hydraulic where the surface water to flow back upstream toward the object. Dangerous as these can be trapped in the recirculating aerated water that can be difficult to exit.

Also known as "stoppers" or "souse-holes".

One of the least concerning looking hazards is actually one of the most lethal dangers that paddlers will encounter. Weirs tend to be uniform and fairly wide allowing them to create a perfect hydraulic across the structure that even the most experienced paddler may not be able to escape.

Drown-out Flow
A flow that submerse the weir.

Undercuts form when rocks have been worn down underneath the surface by the river. Undercuts can occur on the streambed or boulders within a river. Often undercut bounders will lack obvious signs of a pillow on the upstream side.

Since the current flows under the rock, undercuts can easily prove fatal as they suck a boater down under the bounder where there is the possibility of the boater being pinned underwater.

Leaning towards the boulder will make it less likely that you will get pulled under. Leaning away from the boulder allows the current to catch your upstream edge, pulling the boat under.

Runs will often create undercuts in riverbeds / gorges, especially common in softer rocks such as stonestone. These areas should be avoided.

Waterfalls commonly create undercut features behind the base.

Sieves (Slot)
Narrow space that allows water to flow freely, usually two boulders. This creates a high flow through the sieve and can force water up behind the sieve creating turbulence.
Entrapment
Usually when a foot or arm gets trapped between two boulders. This is why paddlers use a defensive swim where they float downstream with their feet raised and arms out to the sides. This helps to minimise feet entrapment and also to prevent head injuries.
Pinned
Boat and / or paddler is pinned to an obstacle.
Entrapment Drowning
Drowning where entrapment or being pinned underwater was the direct cause.
Flush Drowning
General term for an unknown drowning but usually thought to be due to a paddler being pinned underwater by the current even when wearing a PFD or due to the result of a long swim often in cold water. Older adults are more at risk.

Alluvial fan
An alluvial fan is a cone-shaped deposit of sediment. This sediment is called alluvium. These are often formed where a stream has its velocity abruptly decreased.
Anabranch
A minor stream that leaves and rejoins the main river.
Bar

A ridge of sand or gravel near or slightly above the surface and extending across or running parallel to a stream or shoreline.

Point Bar
A deposit of sand and gravel that develops on the inside of a meander bend.

Billabong
Australian term for an oxbow lake. An old meander that has been cut off and isolated from the main channel.
Culvert
A channel or pipes that allows water to flow under a road or railway.
Distributary
A stream that branches off from the main stem of a river.
Ephemeral stream
A stream which only flows after rain for a short period.
Floodplain
Areas alongside rivers that are subject to overflow, formed by the deposited sediment of the flooding water.
Flood runner
A shallow path followed by flood waters. These sometimes rejoin the main trunk of the river.
Headwaters
An inflow of water which flows in at the origin of a stream.
Intermittent stream
A stream which flows irregularly.
Lagoon
A shallow body of water separated from a larger body of water by a strip of land, sandbar or coral reef.
Levee
An artificial bank designed to stop flooding from the main waterway.
Mainstem
The largest river or channel in a watershed.
Meander
A curve in the course of a river.
Perennial stream
A stream which flows for most of the year.
Reach
A section of the river where similar hydrologic conditions exist.
Slumping
Mass movement of incoherent sediment down a slope.
Snag
A dead tree or part thereof that has fallen into a stream causing an obstruction.
Tributary
A stream that contributes its flow into a larger stream, river or other body of water.
Watershed
The entire river system or an area drained by a river.