A brief look at trends and recordings for the rivers along the Darling River, including tributaries from the Condamine River.

Basically you will want rain and high flows to tackle the river systems above Bourke, but the Darling should be OK most of the time, as long as it is flowing all the way to Wentworth.

The upper Condamine River rarely flows at a high enough level to comfortably paddle the gorge. You should time any attempt with rain or walk this section instead. Dangerous if done in a flood due to all of the barbed wire fences across the river and log jams.

At Brosnans Barn, a flow greater than 85 ML/day is seen only 5% of the time and no flow at all for 2 months each year.

The main stretch of the Condamine River rarely flows freely. It would be likely best after a heavy rain, but water levels quickly fall so don't delay your trip! Leave as soon as you consider it safe to paddle after a flood and do not muck about for the first 800 km.

At Warwick, medium flows are highest between February and August (37 ML/day to 54 ML/day), but significant rain events are most likely to occur between December and May.

Discharge from Chinchilla Weir averages at least 85 ML/day 33% of the time, 170 ML/day 25% of the time and 850 ML/day 10% of the time, however the average discharges in the 2010's were about half the long term averages seen. Or a more sobering way of looking at the data, from 5 rain events with flows greater than 850 ML/day every year in the first decade of records to an average of just one rain event every year recently. 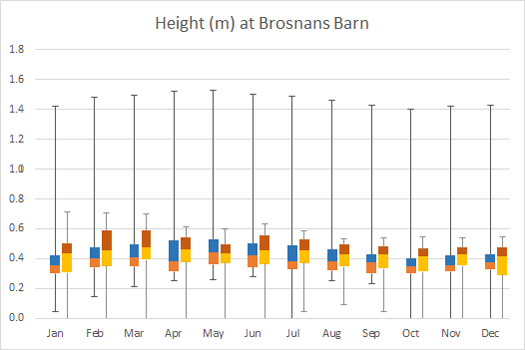 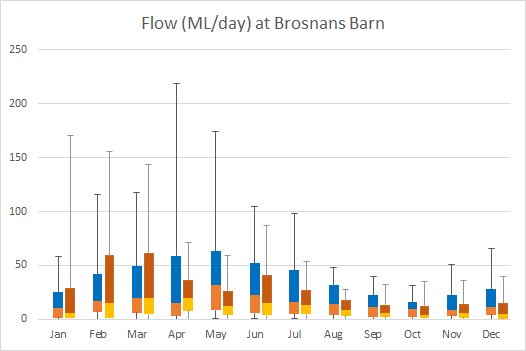 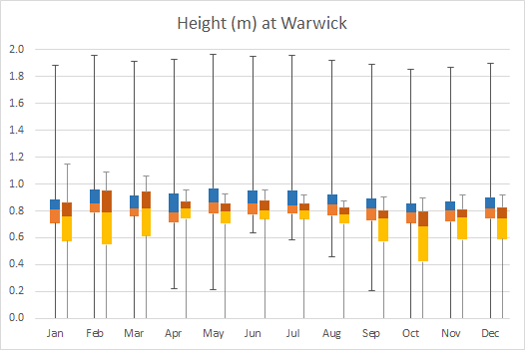 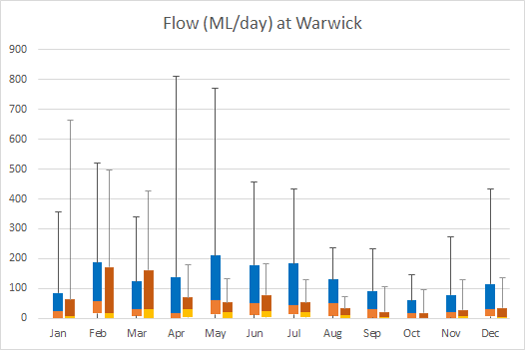 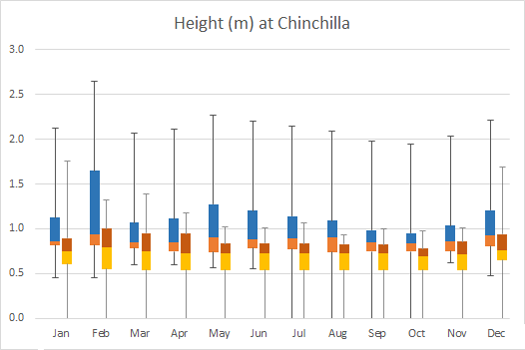 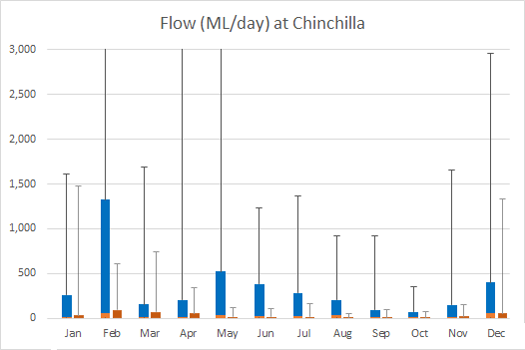 I had a flow of about 275 ML/day down the gorge and this dropped off to around 200 ML/day by the time I made it to Warwick. It felt slightly marginal at this flow to continue past Warwick, but I did keep going until gear failure forced me to stop.

Balonne and Culgoa are probably best done after a heavy rain event too, especially if there are planned releases from the Beardmore dam.

The Balonne River only flows constantly for about half of the year and low to average flows would make this a painful outing with low water levels and log jams. Lake Kajarabie does reach a long way up towards Surat, which would come as a relief to anyone attempting this with a low flow. Any flood waters fall fairly quickly, but the dam could normalise the flow slightly below St George. On my second trip, all flow was stopped at the dam and diverted for irragation. This made for a difficult 7 km portage to get to St George.

The Culgoa River is even trickier but generally safe for experienced paddlers in high to flooded conditions. I must emphasize experienced paddlers as there is a high risk with tree canopies that act as strainers. No flow conditions are the norm on the Culgoa and these would likely prove dangerous with very slow progress expected in a very remote and hostile environment. Flood waters tend to stay around for weeks in the Culgoa floodplains. Paddling the Culgoa in flood is still one of my highlights of the inland rivers. 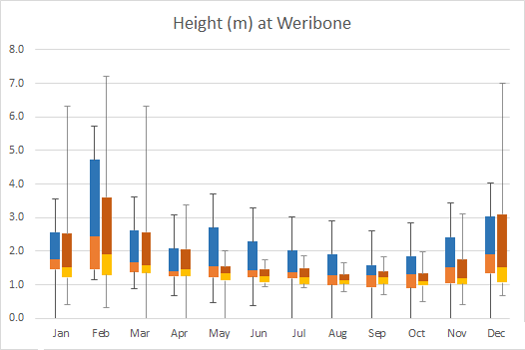 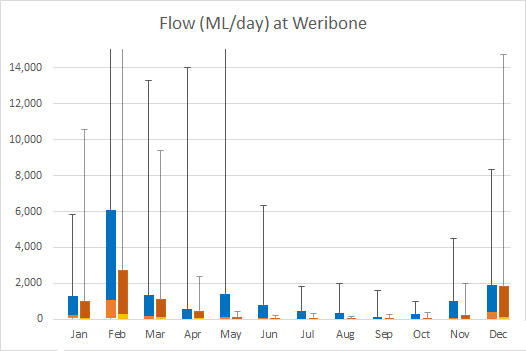 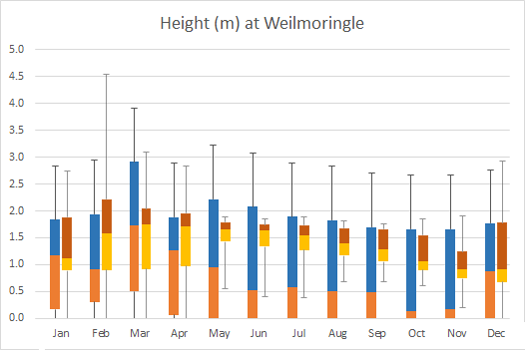 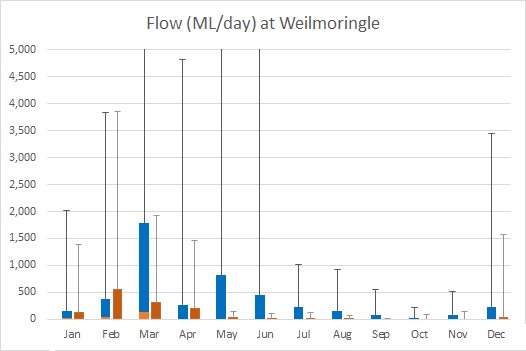 I started with a flow of 3,000 ML/day and paddled consistently over the next week to catch the main flood waters as they passed through the Culgoa Floodplains at around 10,000 ML/day. This was generally a great flow though on the few occasions where I took the wrong branch I saw how easily the log jams would have affected my progress down the system.

Travis Ewan and Daniel Suttle trip noted significant log jam portages and they were roughly tracking a small flood flow that would have ranged from no flow to 10,000 ML/day, flow window was about 5 to 7 days. Mark Kalch's first first trip was tracking a similar but narrower high flow of about 2 to 3 days. Photos and dates suggest he was under 500 ML/day at the QLD - NSW.

A reminder for those unfamiliar with the system, the Balonne River splits into Culgoa and Bokhara rivers. The Bokhara River has a number of distributaries including the Ballandool River (rejoins after the border), Birrie River (joins the Culgoa) and the Narran River that feeds into the endorheic (no outflow) Narran Lake. The four gauges near Hebel and Weilmoringle reflect the majority of the flow across the QLD - NSW border.

NSW Water has stated that in previous years if there was any flow at all, even a mere trickle of 10 - 20 ML/day a day, the river would be navigable its full length because of the weirs. 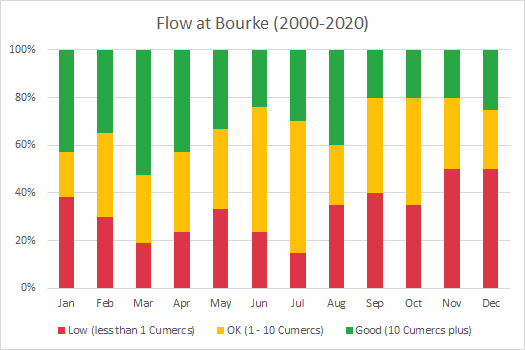 While the Darling River once flowed freely, it now has a more of a boom and bust characteristic over the last couple of decades. This was particularly noticeable in 2018 and 2019 where it mostly ran dry. Without a prolonged rain, the flow will pass through quickly, leaving a small window of pleasant paddling before low waters. It is likely minimal at 1 Cumecs and enjoyable above 10 Cumecs. The MDBA suggested a marginal 10 - 20 ML/day flow could be paddled but I personally wouldn't take that risk. I'm waiting on a flow above 864 ML/day for a sustained period of at least a week or more before I attempt to tackle the river myself.

Higher flows are usually seen about a month after the QLD wet season, from February through April, but winter rains often assist OK flows if there isn't a drought. It takes a flood about 50 days to make its way from Bourke to Menindee.

Depending on storage levels in the lakes, the MDBA may or may not release the water downstream straightaway. Pooncarie should see water that is released from Menindee after approx. 15 days and Wentworth approx. 10 days after Pooncarie.

A flood at Bourke will have a flow greater than 30,300 ML/day. While high flows will be contained by the tall banks at Bourke, downstream they are likely to spread out onto the floodplains.

In general, most of the Darling Rivers waters will come from the border rivers, particularly from the upper NSW catchments and not from the Culgoa River. 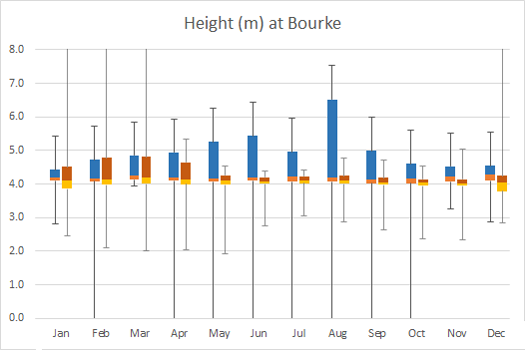 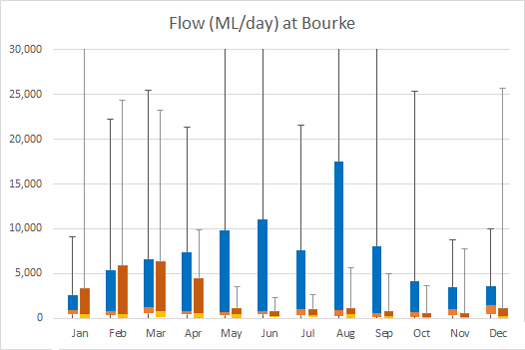 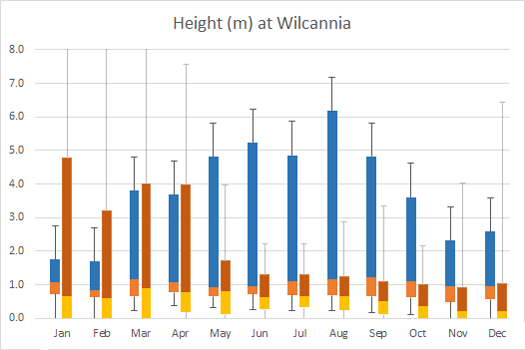 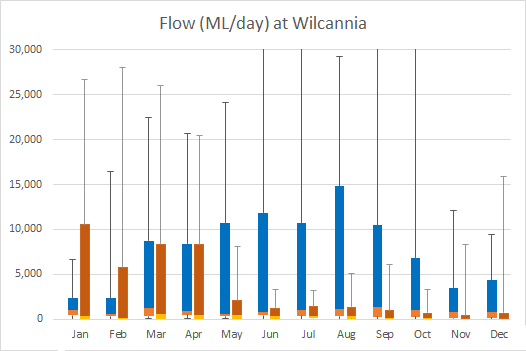 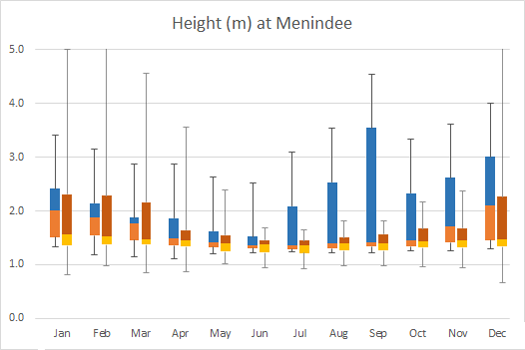 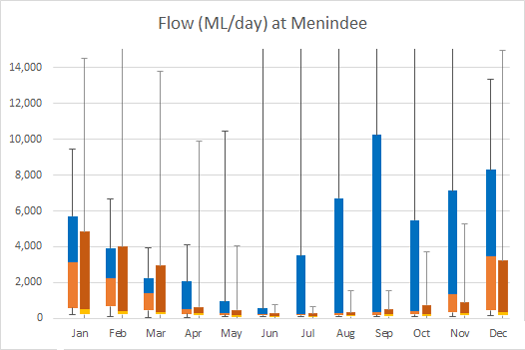 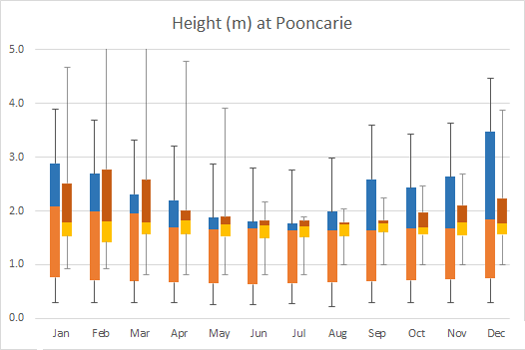 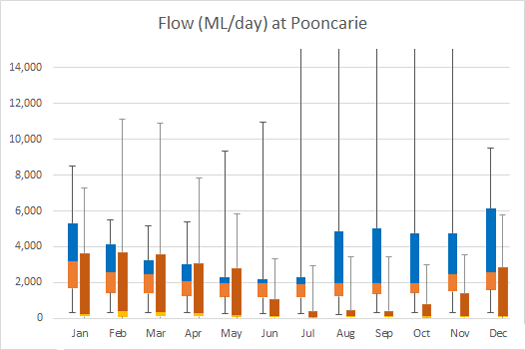 Flows above 250 ML/day down the upper section seem to have had adequate water to paddle down to the lakes. Multiple trips in the sub 400 ML/day in the lower section appear to have had minor issues with weeds and shallows, albeit no horror stories.

Cristo Norman traveled the river in 2008 on the tail end of a decent flow of 700 ML/day but slowly dropped off the back of the high flows and noted some portages / rapids above Menindee. Difficult conditions below Menindee with a marginal release of 50 ML/day. Some key dates and flows noted below.

Bourke (2 April)
700 ML/day. Noted getting caught in a sandbar above Bourke, otherwise good paddling
Tilpa (15 April)
300 ML/day, rapids noted in the next section
Wilcannia (28 April)
110 ML/day
Bindara (11 May)
80 km south of Menindee. Lots of dragging noted.
Pooncarie (15 May)
50 ML/day. Most difficult section with low flow and weeds choking the river.

Bill, et al, did this leg in sea kayaks in 2017. High flows flushed the system, and they paddled the system with 380 ML/day to Menindee and 220 ML/day below. A couple snags were mentioned in the lower section. They took 58 days from Brewarrina to Wentworth. There was a consistent flow of 400 ML/day plus at Bourke during July reported by WaterNSW, and Pooncarie was reading closer to 300 ML/day in August, so the actual flow may have been high than they reported.

While looking at long term averages and tends to help to indicate the best times to plan your trip, this river system is very unpredictable. The following table looks at the median flows over the last two decades.

Low flow (< 1 Cumecs)
Any flow under 1 Cumecs is considered to be low. The MDBA consider 20 ML/day to be enough water to ensure all weirs are fill.
OK flow (1 to 10 Cumecs)
Any flow between 1 Cumecs and 10 Cumecs should ensure the weirs are filled and minimal portages required.
Good flow (10 to 250 Cumecs)
Flows above 10 Cumecs should assist your journey with a decent current.
High flow (> 250 Cumecs)
Flows above 250 Cumecs are considered to be fairly high and a minor flood starts at 30,300 ML/day (indicated with ).

The above table monthly tallies per type.

A look at the last 50 years shows a concerning decline in the flow reported in the river. This includes the 1982–83 drought, but it is the Millennium drought (2001-2009) and the current dry spell (2016-) that have really affected the river flow in the last two decades.

Some additional info for anybody considering to do the Darling River System by kayak.

A look at the current flows along key rivers